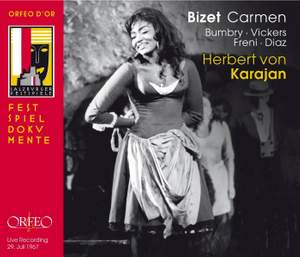 There’s some extremely potent singing from three of the leads (Bumbry, Vickers and Freni’s Micaëla), not least from Bumbry with a subtle range of dynamics that truly suggest both the almost obligatory... — Gramophone Magazine, February 2019 More…

Act I: Où me conduirez-vous? (Live)

“This music seems to me to be perfect," declared Friedrich Nietzsche. Here is a recording made far from the sterile world of the studio which palpably demonstrates how the master conductor, aided by a top-flight cast, brings the work to life on stage. Renewing acquaintance with Karajan’s Salzburg Festival Carmen from the 1960s might be described as a deja entendu experience of a very particular kind. The production opened the 1966 Salzburg Festival and took place against the background of the most tremendous expectations. Built to his own specifications, the Grosses Festspielhaus had been opened in 1960 and provided him with a space, both as a conductor and as a director, that offered him every opportunity to realize his personal vision of what might be termed “decorative music theatre.” This was a vision that Karajan may already have dreamt of as a young Kapellmeister in Ulm. Now, from a distance of fifty years, a live recording of the performance offers a chance to revisit that incredible night.

There’s some extremely potent singing from three of the leads (Bumbry, Vickers and Freni’s Micaëla), not least from Bumbry with a subtle range of dynamics that truly suggest both the almost obligatory compliment to a diva in this opera (‘sexy’) and a real sense of ironic humour…Orfeo’s release remains a curio, if a valuable historical document in terms of style.