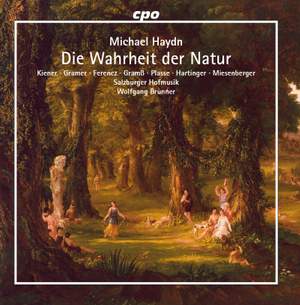 In September 2015 the Salzburger Hofmusik under Wolfgang Brunner presented a semi-scenic performance of the ‘Salzburg Haydn’s’ Singspiel MH118 during the Salzburg Haydn Week and in cooperation with the Michael Haydn Society and the Mozarteum University of Salzburg. More than two centuries had passed since its premiere in Salzburg, and Die Wahrheit der Natur (The Truth of Nature) is now also finally available on CD. Salzburg’s rich theatrical tradition was once inseparably linked to the Benedictine University. The final comedies presented by students at the university at the end of the academic year along with the participation of members of the court ensemble were in particular very popular and open to all local residents. As the music for this delightful comic and didactic poem penned by the Benedictine priest Florian Reichssiegel demonstrates, Michael Haydn also made original contributions to this genre. Reason, in the guise of Mentor, seeks true art with assistance from the three Graces, the daughters of Nature. During their quest for knowledge the four again and again meet curious types like the vain master of song Vollstreich, the braggart painter Wurmstich, and the ill-mannered schoolmaster Bockstolz and his wife Urschel. The plot includes scenes in which the quest for art is portrayed not only as a series of lessons but also as an entertaining adventure.