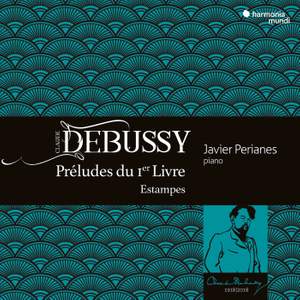 Where Alexander Melnikov chose a period Érard piano for book 2 of the Preludes, Javier Perianes plumps for a modern Steinway to complete the set with Book 1. Both approaches work, and Perianes... — BBC Music Magazine, March 2019, 4 out of 5 stars More…

A century after his death on 25 March 1918, many harmonia mundi artists are eager to pay tribute to Claude Debussy, the magician of melody and timbre, the great ‘colourist’ and father of modern music.

Javier Perianes, for his part, wanted to come back to these Préludes that are so close to his heart, after an earlier album devoted to the intangible links between Chopin and Debussy.

This First Book, presented here in its entirety alongside the sublime Estampes, plunges us into the heart of music capable of dictating its title to each piece… beneath the final double bar.

Where Alexander Melnikov chose a period Érard piano for book 2 of the Preludes, Javier Perianes plumps for a modern Steinway to complete the set with Book 1. Both approaches work, and Perianes packs in the colour and detail here.

These new interpretations have much to commend them, relishing each chord and phrase for its sonority as much as musical content, catching the lyrical qualities that lie between the notes as well as in the combinations of them. There is no denying the sheer finesse and sensual joy of Perianes’ playing. If you like your Debussy soft-focused, this should tick your boxes.

I am glad he’s playing a modern Steinway, because Perianes grabs every benefit possible from the instrument’s vast colour range, sustaining pedal, and seamless action. As he navigates a poetic path through these 12 brilliant, sometimes shadowy, miniatures, you realise what Debussy meant when he described his goal as “an emotional transposition of what is ‘invisible’.