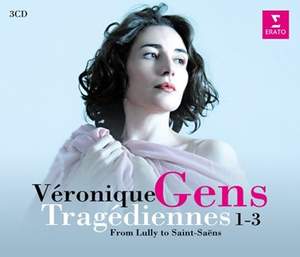 Wonderful surprises by little-known composers from Campra to Méhul and with Gens at the top of her game taking every point with matchless musicianship. — BBC Music Magazine, February 2019, 5 out of 5 stars More…

Sacchini, A: Il me fuit....Rien ne peut émouvoir (from Dardanus)

Véronique Gens is one of the most acclaimed French soprano. She has recorded in 2005, 2008 and 2011 three recitals of operatic arias for soprano from the French tragic operas of the late 17th, 18th and 19th centuries from Lully to Saint-Saëns. Véronique Gens embodies the tragic heroines of the Antiquity such as Dido, Circe, Medea or Cassandra… Véronique Gens is accompanied by renowned French director Christophe Rousset and his ensemble les Talens Lyriques. These three recitals are the most successful she has recorded, with Les Nuits d’été by Berlioz.

Wonderful surprises by little-known composers from Campra to Méhul and with Gens at the top of her game taking every point with matchless musicianship.

Gens’s three albums of ‘Tragédiennes’ range across the length and breadth of the French operatic and vocal repertoire with vocal performances that are remarkable for their vivid characterisations, tonal lustre and sheer vocal stamina…[Rousset] certainly makes no compromises when it comes to vivid tone-painting…An altogether exceptional release.