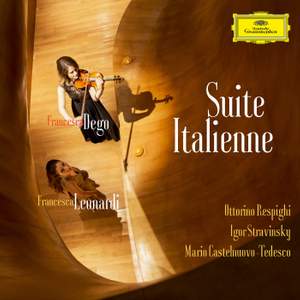 [The Respighi] can easily overheat, but Dego keeps the temperature finely poised between an interesting simmer and boil-over. Her supple, sappy tone suits the music, and she bows in lengthy,... — BBC Music Magazine, January 2019, 4 out of 5 stars More…

Castelnuovo-Tedesco: 'Violetta', Fantasia for Violin and Piano from 'La Traviata'

A world premiere recording of three works by the Italian composer Mario Castelnuovo-Tedesco.

Of particular note is the composer’s Ballade, which was written for and premiered by Tossy Spivakovsky in 1940. It was left to gather dust until February 2018, when Francesca recovered it with the assistance of the composer’s granddaughter, Diana Castelnuovo-Tedesco.Diana contacted Francesca after hearing her on the radio, performing Mario Castelnuovo-Tedesco’s tongue-in- cheek “Figaro” from Rossini’s Barber of Seville. Together, the pair accessed some of Mario Castelnuovo-Tedesco’s unpublished and unperformed works from the Library of Congress in Washington, D.C, including the Ballade. The work is now published by Edizioni Curci, and this is its world premiere recording. Also included on the album are Castelnuovo-Tedesco’s violin paraphrases of operas by Rossini and Verdi, Stravinsky’s Suite Italienne and Respighi’s Violin Sonata in B minor.

[The Respighi] can easily overheat, but Dego keeps the temperature finely poised between an interesting simmer and boil-over. Her supple, sappy tone suits the music, and she bows in lengthy, lissom phrases with exceptionally sure intonation…All told, this is a richly enjoyable recital.

Dego dashes and darts [in the operatic fantasies]: she dispatches her fireworks with aristocratic hauteur. Leonardi is with her all the way and the slightly dry recording helps bring out Castelnuovo-Tedesco’s tangy bitonal harmonies. Played poker-faced, the Stravinsky is a winner too.

Rossini’s Figaro and Rosina spring vividly to life in two little gems by Castelnuovo-Tedesco, whilst ballast is provided by Respighi’s substantial Violin Sonata of 1918, which yields little to César Franck’s in its expansive lyricism.

Dego’s playing offers virtuosity and lyricism in Castelnuovo’s Ballade, and piquant wit in his arrangements of Rosina and Figaro’s arias from the Barber of Seville. Delectable.