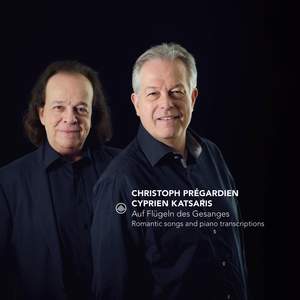 Prégardien can always be relied upon to approach art song thoughtfully and adventurously… [He] sounds like he’s in his element, striding assuredly through this hit parade and savouring each word.... — BBC Music Magazine, February 2019, 3 out of 5 stars (Performance) / 4 out of 5 stars (Sound) More…

Precise vocal control, clear diction, intelligent musicality and an ability to get to the heart of everything he sings ensures Christoph Prégardien's place among the world's foremost lyric tenors. Especially revered as a Lieder singer, he can be heard this season at the Phiharmonie de Paris, the Palace of Arts Budapest, and the Wigmore Hall in London, as well as in Zurich, Lucerne, Kyoto, Tokyo and Bogotá. He will also perform at the Oxford Lieder Festival, the Chopin Festival in Warsaw, the Schubertiade Schwarzenberg Hohenems, as well as part of the "Schubert!" concert series with the Frankfurt Radio Symphony Orchestra.

Cyprien Katsaris, the French-Cypriot pianist and composer, is a graduate of the Paris Conservatoire where he studied piano with Aline van Barentzen and Monique de la Bruchollerie (piano First Prize, 1969), as well as chamber music with René Leroy and Jean Hubeau (First Prize, 1970), he won the International Young Interpreters Rostrum-UNESCO (Bratislava 1977), the First Prize in the International Cziffra Competition (Versailles 1974) and he was the only western-European prize-winner at the 1972 Queen Elisabeth of Belgium International Competition. He was also awarded the Albert Roussel Foundation Prize (Paris 1970) and the Alex de Vries Foundation Prize (Antwerp 1972).

"Following our first encounter on 7th June 2015 in Hamburg on the occasion of our concert with the Winterreise of Schubert, which proved to be a wonderful experience, and considering our perfect mutual understanding, I wondered whether Christoph Pregardien would be interested in a CD project. But what repertoire? Usually the Lieder aficionados are not interested in piano and pianophiles do not seem to be Lieder fans... Then I thought, how about bringing together those two categories of the human species? Suddenly... EURÊKA! (Thank you, Archimedes!) The concept would be a combination of German Lieder, each of them followed by a piano transcription. Christoph Pregardien immediately agreed." Cyprien Katsaris

Prégardien can always be relied upon to approach art song thoughtfully and adventurously… [He] sounds like he’s in his element, striding assuredly through this hit parade and savouring each word. But Katsaris does not always have the light and sense of fantasy to rescue the heavier-handed or slavish transcriptions from their redundancy.