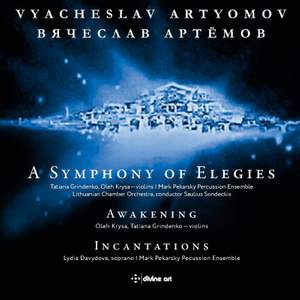 Well-worth exploring … There is also a Requiem, apparently the first to be written in Russia since the 1917 revolution, which has been much praised. — MusicWeb International, November 2018

Artyomov: A Symphony of Elegies

A Symphony of Elegies: I. Elegy I

Incantations: I. Incantation of Fate (Of Serpents)

Vyacheslav Artyomov is considered by many to be Russia’s greatest living composer. After the fall of the Soviet regime his music has travelled the world to great acclaim. It is deep, ultimately spiritual and brilliantly crafted, with influences from the Russian symphonic tradition colored by Mahler, Scriabin, Honegger and Messiaen to name a few – but melded into a unique voice. The Divine Art Artyomov Retrospective is a mix of new recordings and former Melodiya releases. It continues with the Symphony of Elegies – a total contrast to his other massive and intense symphonies, being ethereal, generally very quiet and evoking a sense of timelessness. The album is completed by two more major works – ‘Awakening’ for violin duo, and ‘Incantations’ featuring the heavenly voice of the late Lydia Davydova with four percussionists. This is an album full of really inspired masterpieces.

Well-worth exploring … There is also a Requiem, apparently the first to be written in Russia since the 1917 revolution, which has been much praised.