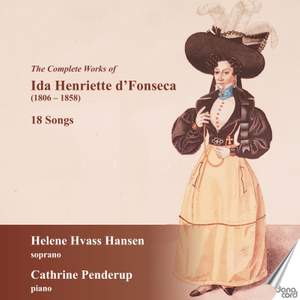 Ida Henriette Fonseca was born in Copenhagen in 1806. Her father was Abraham Fonseca, a first generation immigrant and a German-Portuguese Jew from Hamburg, who at the beginning of the 19th century settles down in Copenhagen as a broker. Here, he marries a local woman, Maria Louise Kiaerschou. The Danish theatrical historian Poul Hansen describes Abraham Fonseca at the end of the 19th century quite derogatively as “an immigrated Portuguese from the newly arrived banker aristocracy.” Ida has three sisters and two brothers. The finance sector is by no means a big business in Copenhagen in the years following the national bankruptcy of 1813. So the Fonseca Family have to struggle to feed their children. The children grow up and must contribute to the household as soon as possible. Several of them are talented singers, and if one wants to progress as a singer in Copenhagen in the 1820s, there is one man to turn to: the choirmaster Giuseppe Siboni at the Royal Theater, which is where Ida honed her craft. She went on to become the leading singer in Scandinavia, and was a skilled composer as well. This is the first ever complete recording of the 18 beautiful songs by the singer and composer. The songs are original, melodic, and utterly charming.