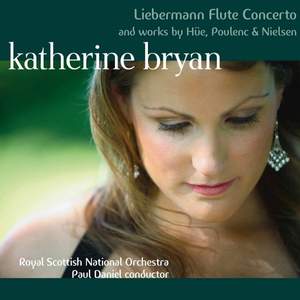 For her recital debut the in-demand concerto soloist Katherine Bryan performs a selection of twentieth-century concertos, including the rarely recorded Liebermann Concerto for Flute and Orchestra. The Liebermann concerto has rarely been recorded in its entirety. Commissioned and originally performed by James Galway, the concerto is considered one of the most substantial and significant additions to the flute repertoire in recent years. Considered ‘a flautist’s dream composer’ (BBC Music Magazine) Liebermann’s writing is full of optimistic, audience-friendly and tuneful melodies with rapid-fire fingering passages that showcase the technical prowess of the soloist. Katherine stated: ‘I feel that Lowell Liebermann’s concerto encompasses all the emotions and colours of which the flute is so brilliantly capable and it is for me, quite simply a twentieth-century virtuoso masterpiece, and thrilling to play.’ The inclusion of works by Hu¨e, Nielsen and Poulenc in the programme shows the particular diversity of the flute, demonstrating the variety of repertoire composed for the instrument during the twentieth century.