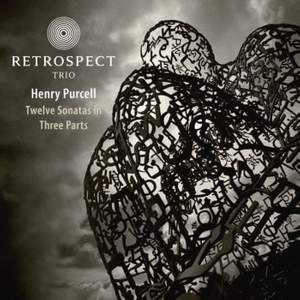 This is the follow up to Retrospect’s debut recording, released to celebrate the 350th birthday of Henry Purcell, and reunites four Baroque instrumentalist superstars. Continuing the composer’s trio sonata texture found in Ten Sonatas in Four Parts, Purcell’s later set is much more forward-looking to the later Baroque rather than taking inspiration from the old style contrapuntal models found in the earlier set. These sonatas display the composer’s innate ability at blending influences from French, Italian and English music; exotic dissonances can be heard alongside the unique use of counterpoint. This recording was nominated for a BBC Music Magazine Award and an International Classical Music Award and was named a ‘Choice’ recording by Gramophone, BBC Music Magazine and International Record Review. Recorded at St George’s, Chesterton, the recording beautifully captures the timeless beauty of Purcell’s most highly regarded instrumental works.