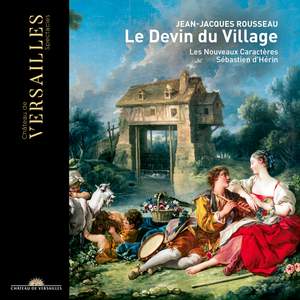 The production by Jean-Jacques Schaettel, filmed by Olivier Simonnet, is straightforward…The singers are hardly taxed by the music but they sing mellifluously and act with conviction; the 12-strong... — Gramophone Magazine, January 2019 More…

Perhaps Jean-Jacques Rousseau’s Devin du Village has been waiting just for you for two centuries at the Theatre de la Reine at the Petit Trianon. On September 19, 1780, Marie-Antoinette was on stage, in costume, and was acting with her troop of aristocrats in front of a public of close friends. That evening, she was singing the role of Colette, the heroine of this one act opera composed in 1753 by the philosopher Jean-Jacques Rousseau, perhaps the most celebrated work of its time. That exceptional evening, a veritable fantasy of the Queen’s who imagined that she was a shepherdess, has been resuscitated under the direction of Sebastien d’Herin in a costumed reconstitution, staged in the original historic sets. A bonus film of the complete performance accompanies this recording.

The production by Jean-Jacques Schaettel, filmed by Olivier Simonnet, is straightforward…The singers are hardly taxed by the music but they sing mellifluously and act with conviction; the 12-strong band under Sébastien d’Hérin is grace itself.

The best singing by far comes from the tenor Cyrille Dubois’s ardently sensitive Colin. Sébastien d’Hérin’s direction of his fine small orchestra is spot on, capturing the strong rhythms and often rustic character of Rousseau’s writing to near perfection. There are many worse ways to pass an hour or so than in the company of Rousseau’s slight but engaging little opera, especially when as sympathetically presented as it is here.