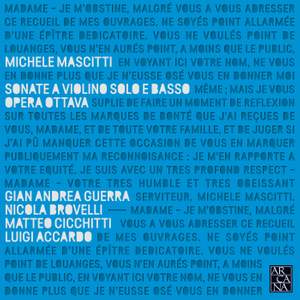 At the beginning of the 18th century Italian instrumental music reached France and began to make its decisive impact. Michele Mascitti was a protagonist of this remarkable change. The young violinist moved from Naples to Paris where he spent most of his long life and managed to publish nine collections of instrumental music between 1704 and 1738. The extraordinary success and popularity of Mascitti’s works allowed him to live for many years as a free-lance musician and to be applauded and admired in the artistic circles of the French capital. His music brings us back to the fashionable and refined atmospheres of the Parisian aristocratic salons and to the galanterie so beautifully illustrated in the paintings of the time.

The violin sonatas recorded for the first time in this CD blend the brilliant and passionate expressivity emanating from the Neapolitan legacy with the elegance and grace of the French instrumental tradition and offer an exquisite example of the new union of tastes.