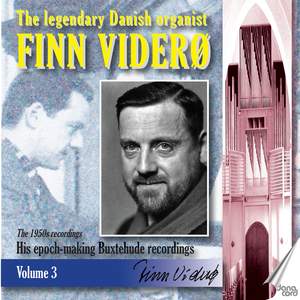 Buxtehude: Praeludium in A Minor, BuxWV153

Here is the third volume in the retrospective 2-CD series featuring undoubtedly the greatest Danish organist ever. Finn Viderø made these legendary recordings in the 1950s and they are here for the first time collected and presented in new digital masters on CD. None were ever available on CD before. All are expertly transferred from best possible sources and presented with extensive notes and illustrations.

When the four LP records were released world wide with Finn Viderø playing the organ music of Buxtehude they won the Grand Prix du Disque and lifted Buxtehude playing to a new level few if any ever since could reach. The best Danish organs were used brilliantly.