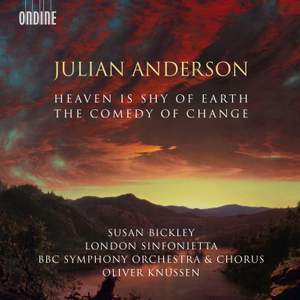 Heaven is Shy of Earth is a substantial work of intriguing paradoxes…Gloriously uplifting and luminescent, it has dark threads and exudes both a striking simplicity and a numinous complexity…Anderson’s... — BBC Music Magazine, Christmas Issue 2018, 5 out of 5 stars (Performance)/4 out of 5 stars (Sound) More…

Anderson, Julian: The Comedy of Change

This recording includes the world premiere recording of an oratorio by Julian Anderson (b. 1967), one of the most remarkable British composers of our era, conducted by the late Oliver Knussen and performed by Susan Bickley and the BBC Symphony Orchestra and Chorus. These recordings highlight the art of Julian Anderson and are a unique testimony of artistic collaboration and friendship between him and the conductor that lasted for 37 years. Julian Anderson was commissioned to write a substantial work for solo mezzo-soprano, chorus and orchestra for the 2006 BBC Proms. This resulted in the creation of Heaven is Shy of Earth, based on texts by poet Emily Dickinson. The work also features texts of Latin mass, although it is by no means a sacred work. This substantial work ends in a beautiful climax of harmonious ecstasy. The Comedy of Change is a work for 12 instruments which pays tribute to Charles Darwin and celebrates the 150th anniversary of the publication of his book The Origin of Species.

Heaven is Shy of Earth is a substantial work of intriguing paradoxes…Gloriously uplifting and luminescent, it has dark threads and exudes both a striking simplicity and a numinous complexity…Anderson’s long-time friend Oliver Knussen, who died in July, conducts both works, and these live performances stand as a testament to his fine ear, finely judged pacing and selfless advocacy.

This pair of live performance radiates the clarity and conviction [Knussen] brought tot the most challenging contemporary scores, and the subtle balances and rich colours of the music are beautifully caught in these recordings, eight years old but sounding as fresh as the day they were made.

The first is a semi-secular oratorio in which the Latin Mass sits beside Emily Dickinson verse, and the compound shines out in an Andersonian way, comprehending both Britten and Tippett. The Comedy is a glitteringly inventive score for a Mark Baldwin ballet on The Origin of Species.