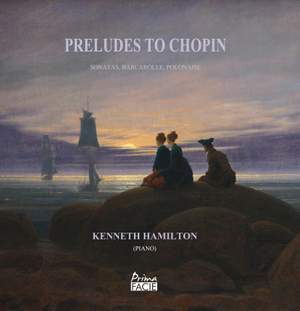 Following the widely admired 'Back to Bach' and 'Ronald Stevenson' recordings by Kenneth Hamilton, Prima Facie are proud to present 'Preludes to Chopin', his remarkable new CD.

Kenneth Hamilton comments: “The inspiration for this recording is identical to the motivation for my book 'After the Golden Age: Romantic Pianism and Modern Performance': an abiding fascination with the styles of the “golden age” of piano-playing from Chopin to Paderewski, and how these approaches might enrich our performances today. I’ve used Chopin’s thought-provoking Preludes as they were originally intended—as exquisite prefaces to longer pieces—and adopted a wide range of Romantic performance techniques. My aim was not a direct imitation of historical recordings, but to open myself up to the wider panorama of interpretative possibilities within this wonderful music.”

The recording features the great Chopin Sonatas and the Barcarolle, along with two rarities: Busoni’s dramatic reworking of the “Heroic” Polonaise, and a hauntingly nostalgic version of the Chopin/Liszt 'My Joys', played according to Liszt student Bernhard Stavenhagen’s “personal memories of Liszt”. The CD is accompanied by Hamilton’s own detailed notes on the pieces and their performance.