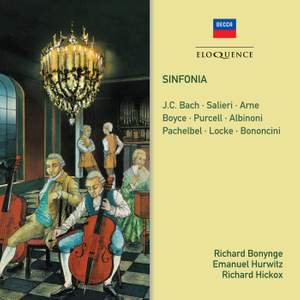 Salieri: Concerto in C for Flute, Oboe and Orchestra

Boyce: Symphony No. 1 in B Flat Major

Locke: Music from The Tempest

Albinoni: Adagio for Strings and Organ in G minor

Three Decca albums of English and Italian Baroque sinfonias from the analogue era, newly remastered and compiled and featuring several recordings new to CD. Looking back to a time when Britain really did rule the waves, ‘Sinfonia’ draws on the vibrant and cosmopolitan culture of eighteenth-century London. Not only local composers such as William Boyce, Charles Avison and (naturally) Thomas Arne were featured on the 1966 album of ‘Music in London 1660-1760’ but also the figure of Johann Christian Bach, whose brilliant invention and nose for entrepreneurship dominated the city’s music scene in the decade after his father’s death. It is his E major symphony for double orchestra that is the major work on the album, further complemented by excerpts from masques by Locke and Purcell, and directed with a fine sense of idiom by Emanuel Hurwitz.

The English Chamber Orchestra returned to the Decca studios for more J.C. Bach on an album released in 1969. They recorded an earlier, more compact symphony, and his richly elaborated sinfonia concertante for flute, oboe, violin and cello, both in editions prepared and conducted by Richard Bonynge. Critics raised their eyebrows at some of

Bonynge’s interventions but again were united in praise for the ECO’s stylish playing. With his nose for a rarity, Bonynge also included the dashing ‘Veneziana’ symphony by

More standard fare was recorded by the young Richard Hickox and his self-founded chamber orchestra in 1976: the Albinoni/Giazotto Adagio, Purcell’s Chaconne and the Canon by Pachelbel without which no self-respecting Baroque compilation would be complete. But they also turned up less-familiar treasure such as a sonata da chiesa by

Bononcini: all performed with the kind of unobtrusively vivid and unmannered good taste which was the hallmark of English chamber ensembles in the analogue era.

‘J.C. Bach’s bracing little symphony is the prize of the lot ... the work was made for stereo ... Performances are warm and sensitive.’ - High Fidelity, May 1967 (Hurwitz)

‘Bonynge’s LP of music by Johann Christian Bach and Antonio Salieri was in the Raymond Leppard mode: modern instruments, but historically aware performance styles. One doesn’t associate this conductor with 18th-century masters, yet this record was another example of his inquisitive tastes and solid scholarship.’ - Fanfare, Jan/Feb 2004