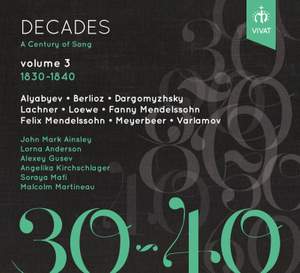 Kirchschlager, a singer incapable of being boring, has the lion’s share of the German Lieder here…With accompaniments that are often discreetly supportive, it’s too easy to take for granted Martineau’s... — Gramophone Magazine, Awards Issue 2018 More…

Alyabyev: What are you singing, beautiful damsel?

What Are You Signing, Beautiful Damsel

This major recording series, across which a host of world-renowned singers draw listeners, decade by decade, through a century of song, from 1810 to 1910, reaches its third volume. Each issue features a carefully planned, varied programme performed by household names, whilst the series overall creates a comprehensive survey of song through the entire nineteenth century – an invaluable teaching asset, as well as a joy for listeners. 1830-1840 marks the fascinating bridge between the death of Schubert and Schumann’s outburst of song in the 1840s. Vividly contrasting works from Germany bring songs by Fanny Mendelssohn Hensel and her brother Felix Mendelssohn as well as Franz Lachner, and Carl Loewe; from France by Giacomo Meyerbeer and Hector Berlioz; and from Russia songs by Alexander Alyabyev, Alexander Dargomyzhsky and Alexander Varlamov. Distinguished mezzo Angelika Kirschschlager – characterful and inventive as ever – takes the lion’s share, joined by sopranos Soraya Mafi and Lorna Anderson, tenor John Mark Ainsley and bass Alexey Gusev, accompanied by series creator, pianist Malcolm Martineau. Of especial note are Soraya Mafi’s delicious performances of songs by Fanny Mendelssohn – sweettoned, expressive, musical, definitely a soprano to watch. John Mark Ainsley is on fine form withtypically intelligent performances of songs by Lachner; Russian bass Alexey Gusev provides the unique vocal colours of his homeland.

Kirchschlager, a singer incapable of being boring, has the lion’s share of the German Lieder here…With accompaniments that are often discreetly supportive, it’s too easy to take for granted Martineau’s contribution: rhythmically animated, subtly nuanced, always alive to opportunities for wit and colour.