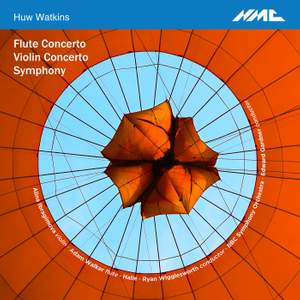 Cast in the conventional three movements, [the Flute Concerto] dances through a musical landscape full of light and shade. Its invigorating sense of pace and momentum is beautifully caught by... — Gramophone Magazine, November 2018 More…

Watkins is one of today’s leading composer-pianists and this album (his second for NMC Recordings) showcases his vibrant, lyrical and impeccably crafted orchestral writing. Both the Flute and Violin Concertos were composed for soloists with whom he already had a close working relationship. Adam Walker is the principal fl autist for the London Symphony Orchestra, who Watkins' describes as having an 'amazing sound and control of his instrument'. The delicate orchestration in the Flute Concerto allows the solo fl ute to take fl ight as it weaves in and out with skittish motifs. Alina Ibragimova is the soloist in the Violin Concerto, premiered at the BBC Proms in 2010. The piece harnesses Ibragimova’s dynamic and intense, fi ercely intelligent playing, switching from attacking virtuosity and molten lyricism, often in an instant. The result is dramatic and utterly compelling.In this album's liner notes, Steph Power writes that Watkins has 'long seemed a symphonist in waiting, with a natural affi nity for big-boned yet fi nely-wrought drama'. Cast in two movements, Huw Watkins’ Symphony does not strictly adhere to classical symphonic form. Rather, the composer interprets this great tradition through his development of ideas and use of the orchestra. The result is a thrilling, huge and percussive sound, brimming with excitement and energy.

Cast in the conventional three movements, [the Flute Concerto] dances through a musical landscape full of light and shade. Its invigorating sense of pace and momentum is beautifully caught by Adam Walker...[The symphony is] a work one has to go back to straight away and Mark Wigglesworth’s account, with the Hallé on sublime form, is superb. Another great British symphony, strongly recommended.

One of the most fascinating aspects of this album for me is Watkins’s ingenious approaches to writing for flute and large orchestra, allowing Adam Walker to hover miles above low brass and contrabassoon in some passages, and setting him against muted high strings and/or solo violin in others. The Violin Concerto, despatched with fearless panache by Ibragimova, is more abrasive and overtly virtuosic, but equally worth hearing.