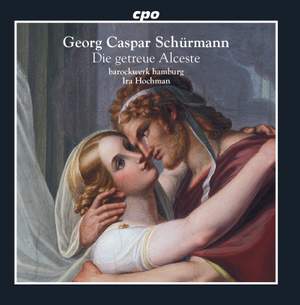 An Opera Revival – Three Centuries Later. In 2016, almost three hundred years after the composition of Georg Caspar Schürmann's Die getreue Alceste, barockwerk hamburg presented a semi-scenic performance of this opera in the atrium of the Hamburg State and University Library. The abridged version on this CD contains the most important elements of the action as well as the musical highlights of the work. In his text the booklet author Jürgen Neubacher guides us through the action with a synopsis and explanatory inserts. In keeping with the ancient Alcestis story, love and death are the two central themes of the opera, and their emotionally charged development by the librettist and the composer numbers among the work's most magnificent moments. Schürmann's musical language initially suggests simplicity; it alternates between elements of song character and coloratura vibrancy and lends special emphasis to melody while resting on a solid compositional-technical foundation. On closer hearing, however, it reveals its great tonal beauty, rich imagination, and efficiency. This opera was extraordinarily successful when it was performed a total of forty-two times in Hamburg from 1719 to 1723.

Ira Hochman draws a spirited response and good playing from the orchestra.