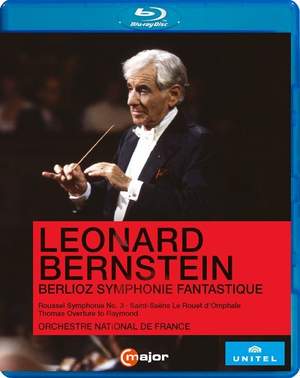 This French programme offers a stimulating blend of celebrated repertoire as well as ‘special tips’ from the Romantic era to the early 20th century. These concerts of Leonard Bernstein were unanimously hailed in the press, both for the dynamism and brio of a conductor at the peak of his artistic powers, and for the unmistakable signs of rejuvenation of the Orchestre National de France. Featuring Hector Berlioz’ Symphonie fantastique, subtitled Episode in the Life of an Artist, Albert Roussel‘s Symphony No. 3 – Leonard Bernstein is, in a sense, paying homage to his friend and benefactor Serge Koussevitzky, who commissioned the work for the 50th anniversary of the founding of the Boston Symphony Orchestra in 1930 - Ambroise Thomas’s sparkling, Rossini-like Overture to Raymond and Camille Saint-Saëns’ Le Rouet d’Omphale it was ‘… one of the most wonderful Berlioz concerts that you can dream of …’ (Le Monde).