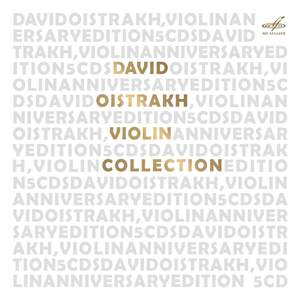 Tchaikovsky: Piano Trio, Op. 50 "In Memory of a Great Artist": I. Pezzo elegiaco

I. Song of Ophelia

II. Gamayun, the Bird of Prophecy

III. We Were Together

David Oistrakh: David Oistrakh’s Speech in January 8, 1969 After Working Session of Secretariat of Union of Composers

Melodiya presents a set dedicated to the 110th anniversary of the great twentieth-century violinist David Oistrakh. This set features recordings that capture the versatility of Oistrakh’s performing genius – from early phonographic records of the 1930s, when his triumphs at the competitions in Warsaw and Brussels made him a world class performer, to the never before released recital of 28 December 1972 when the artist performed onstage despite his serious heart disease. What makes this set particularly special is the recording of Dmitri Shostakovich’s sonata made together with the composer at his home in 1968, on the eve of the official premiere. The set also includes a recording of the premiere of Shostakovich’s Seven Poems by Alexander Blok that took place in 1967 in Moscow and featured Galina Vishnevskaya, Mstislav Rostropovich and Mieczyslaw Weinberg.