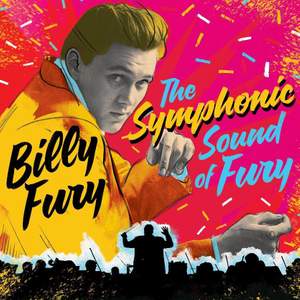 When Will You Say I Love You

Once Upon A Dream

Last Night Was Made For Love

I’d Never Find Another You

‘The Symphonic Sound of Fury’ showcases Billy Fury’s unparalleled original vocals from the legendary album ‘The Sound of Fury’ backed by newly recorded arrangements from the City of Prague Philharmonic Orchestra, conducted by James Morgan. This title captures Billy’s timeless singing and marries it with a deeply compelling backdrop sure to breathe new life into these legendary recordings.

From the producers (on the process of putting Billy with an orchestra): We were delighted to be asked to create a new symphonic album of Billy Fury’s iconic songs. For some, we added an orchestra to the existing track, perhaps subtly doubling the rhythm section so that it stood up to the addition of 50 more players. For most, though, we ‘stripped’ Billy’s voice from the original track, using a combination of different studio software techniques. Some of Billy’s original arrangements were already quite big, and his voice was quite low in the mix, so the strip off process left lots of ‘artefacts’ behind (bits of the old arrangement). For these we then created the new orchestral arrangement around the bits left behind - a bit of a jigsaw puzzle! So the results are a blend of old and new, while all the time we’ve been careful to make sure we retained the spirit of the original performance. Working the recordings in detail felt a little like the audio equivalent of a painting restoration; when we were working with Billy’s vocal in isolation, it seemed almost as if we were in the recording studio in West Hampstead with him. Message from Lisa Voice ,Billy’s partner and head of the BF Estate: “ There will only ever be the one and only Billy Fury, and despite being so wonderfully self-effacing I am sure that he would, privately at least, have been proud of the way his wonderful recordings have now been complemented by a philharmonic orchestra. I’ll never find another you darling.” My love. Lisa