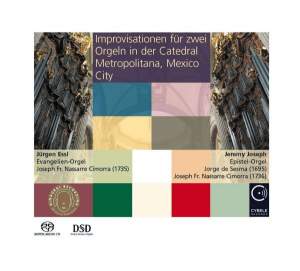 Improvisations For Two Organs In The Metropolitan Cathedral, Mexico City

“Music is not that which is to be composed, but that which is to be birthed” (Isang Yun, composer) Art is not a hermetic matter - certainly not in the case of the Catedral Metropolitana, the largest cathedral in Latin America which lies at the heart of Mexico City. Arising from the depths of the cathedral, further musical events have been born, one of which is this edition of improvisations for two organs. The other is the 6 Conciertos for 2 organs R. 463 by Padre Antonio Soler (1729–1783), also released by Cybele Records. Improvisation as a creative process, according to Yun, is influenced by mental, spiritual and emotionally interconnected elements, though also by space itself, because space is information: "Although it (space) is often understood as nothingness or something which is missing, it is definitely not a black hole. It is much more likely to be a container that connects, enables and encompasses everything... "(Lama Ole Nydahl on space in Buddhism). This, perhaps, explains how the organists commune with each other entirely without visual contact. In addition, there were no preparations or rehearsals for the improvisations on this album. Both musicians share in the joy of wholly unprepared music-making, without setting themselves any specific tasks beforehand. At best, all that is determined is who begins and which basic registration is selected. The intuition in the moment the other organist changes harmony or movement - and even where it's heading - has developed between Jürgen Essl and Jeremy Joseph over the course of many years of collaboration and musical development. Through their common fondness for early music and jazz, they have experimented with improvisations in styles before 1800, extending to the romantic and principles of neo-classicism, thus developing a very distinct language as a duo.