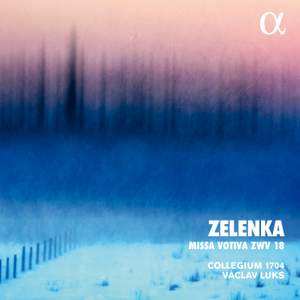 Missa votive is among a handful of liturgical works composed late in the life of Jan Dismas Zelenka, the Bohemian musician who arrived at the Dresden court in or about 1710 as a violone player in the celebrated Hofkapelle of August II, King of Poland and Elector of Saxony. Throughout the 1720s, and whilst still employed as a performing musician, Zelenka composed constantly, mostly producing music for the recently established Catholic court church in Dresden. After the death of Dresden Kapellmeister Johann David Heinichen Zelenka became responsible for the direction of music in this royal chapel, a task at which he worked untiringly with neither appropriate title nor remuneration. The Missa votive draws attention to the health of the composer who had experienced at least two major bouts of illness during the 1730s. The autograph inscription on the cover of the score reads ‘Vota mea Domino reddam. Psal: 115. Versu 5…’ The fifth verse of Psalm 115 is ‘Vota mea Domino reddam coram omni populo ejus’ (I will pay my vows to the Lord, before all his people). Another Latin note at the end of the score states that the mass was composed in fulfillment of a vow. The work is one of the great masses created by Zelenka during the final years of his life.