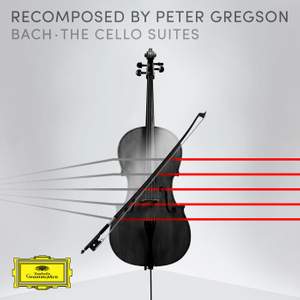 Despite some slightly weak cello playing, these suites rearranged for a five-personal cello ensemble, analogue synthesizers and solo cello create a magnificent soundworld and the voicing of the... — BBC Music Magazine, February 2019, More…

Peter Gregson is a cellist and composer from Edinburgh, Scotland. He collaborates with many of today’s leading film composers, including Rupert Gregson-Williams and Max Richter He has worked and performed on Ed Sheeran’s album ÷ (Perfect,How Would You Feel, Happier) As composer, his score for Alan Rickman’s A Little Chaos (Original

Motion Picture Soundtrack) was nominated at the 2015 World Soundtrack Awards, and he has just completed his first video game score for PlayStation’s BOUNDLESS (expected 2018) Being a cellist himself, Peter Gregson has been performing the Bach Cello Suites since his childhood He has now created a mesmerizing, credible and commercial new version of the Cello Suites. Peter Gregson can present and moderate this project by himself, in different set ups.

Despite some slightly weak cello playing, these suites rearranged for a five-personal cello ensemble, analogue synthesizers and solo cello create a magnificent soundworld and the voicing of the multi-layering is effective and enveloping.

There’s plenty of invention on display, ranging from Steve Reich-like phase patterns un the Allemande of the First to more Brian Eno-like ambient soundscapes in many of the Sarabande movements…Some will no doubt point to the ever-resourceful and infinitely recyclable potential of Bach’s own music as the recipe for this project’s success but that shouldn’t take away from Gregson’s won very important contribution as its principal performer and recomposer.