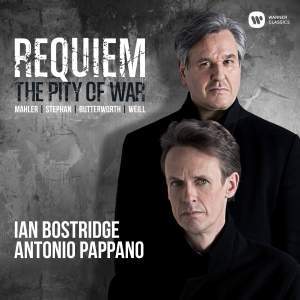 Offer, Requiem – The Pity of War

I. "Loveliest of trees"

II. "When I was one-and-twenty"

V. "The lads in their hundreds"

VI. "Is my team ploughing?"

III. "Come up from the fields, father"

Interview,  Ian Bostridge on Requiem: The Pity of War

The tenor talks to Katherine about his recent recording of songs by Mahler, George Butterworth, Rudi Stephan and Kurt Weill with Antonio Pappano, released at the end of October on Warner Classics.

Recording of the Week,  Requiem: The Pity of War from Ian Bostridge and Antonio Pappano

The tenor and pianist join forces for a programme of Butterworth, Rudi Stephan, Kurt Weill and Mahler to commemorate the centenary of Armistice Day next month.

Marking the 100th anniversary of the end of World War I, Ian Bostridge and Antonio Pappano have assembled Requiem, a programme of songs offering historical and poetic perspectives on this momentous event. Composed over a period of some 50 years, the songs are by Gustav Mahler, Kurt Weill and two creative musicians of promise and achievement whose lives were cut short by the Great War, the Englishman George Butterworth (1885-1916) and the German Rudi Stephan (1887-1915).

Bostridge and Antonio Pappano are on superb form here, carefully responsive to style and mood, yet striving throughout for unsparing immediacy of expression…Stephan’s taxing vocal lines push Bostridge to his limits in places, though the atmosphere of sensual introversion is finely sustained…The Wunderhorn songs find Bostridge at his most expressionist…A disc of great power and intelligence, it’s both haunting and undeniably strong.

The three Wunderhorn songs are the highlight of the album for me, though I suspect that they’re also the tracks which will really polarise listeners: this is where Bostridge pushes the voice to its absolute limits, flattening the tone and leaving high notes exposed and raw as Mahler’s terrified little drummer-boy and mortally wounded soldier live out their final, agonising moments...Like the album as a whole, it’s by no means an easy listen - but nor should it be.

Bostridge and Pappano revel in the folk-like Butterworth numbers and the heady Romanticism (recalling Strauss, even early Berg) of Stephan’s cycle...Bostridge’s distinctive, idiosyncratic style lends more than a hint of rage to Mahler and Weill’s anti-militaristic irony.

This most anguished of British tenors sings as if piercing each note with a bleeding arrow in a selection that doesn’t just make you feel deeply, but also makes you think...a most thoughtfully planned, wide-ranging recital, splendidly serviced by Pappano’s nimble piano.