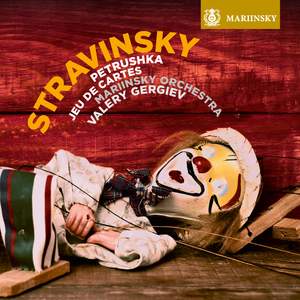 Fourth Scene: I. The Shrovetide Fair (towards evening) (1911 original version)

Stravinsky’s score to Petrushka is one of his most celebrated works and a product of his famous collaboration with Diaghilev that also produced The Firebird and Rite of Spring. Presented here in the composer’s original 1911 version, it tells the story of the loves and jealousies of three puppets who are brought to life during the 1830 Shrovetide Fair in Saint Petersburg. Its colourful music typifies Stravinsky’s work during the period and is characterised by the famous bitonal ‘Petrushka chord’.

A ballet in ‘three deals’, 1937’s Jeu de cartes stems from Stravinsky’s life-long enthusiasm for cards; poker in particular. A commission by Lincoln Kirstein and his newly formed American Ballet Company, it was composed during Stravinsky’s neoclassical period. The whimsical music focuses on the deceitful Joker who thinks himself unbeatable, thanks to a chameleon-like ability to become any card. During the work the Joker wages battle with other hands, but after two victorious rounds and the appearance of a third, he is vanquished by a Royal Flush of Hearts. Stravinsky regularly read La Fontaine during the composition of Jeu de cartes, chosing this quote to include in the score: ‘We must wage continual war against the wicked. Peace in itself is a fine thing, I agree, but what use can it be with enemies who do not keep their word?’

Jeu de cartes steals the show…This vivacious performance projects the music’s neoclassical lines cleanly, while avoiding sterility. Gergiev’s lightness of touch enables the wit to sparkle, especially in the contrasting variations of the ‘Second Deal’, all captured in superb surround sound. A pity, then, that Petrushka is periodically scrappy and does not match its protagonist in springing to life.

Bold local colours are pretty much a given for Petrushka with this orchestra and this conductor in this location. But the vividness and ‘authenticity’ Gergiev as puppeteer is so mindful of the music’s folksy roots that the whole has a coarse-cut immediacy that is highly distinctive.