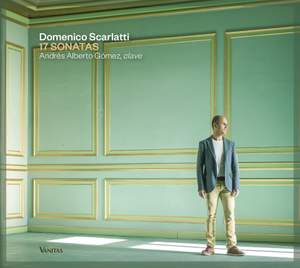 Although during his life Domenico Scarlatti composed fifteen operas, dozens of arias, duets, cantatas, oratorios and several religious works, his 555 harpsichord sonatas support to date the full weight of his fame as a composer. Scarlatti was a 'maestro del cembalo', a perfectionist and passionate composer and performer of harpsichord music.

Gomez is founder and director of the ensemble La Reverencia. His performances as soloist and continuist cover all of Europe. He has performed with several renowned ensembles such as Les Arts Florissants, Tasto Solo or La Fura dels Baus, being directed by musicians such as William Christie, Paul Dombrecht, Paul McCreesh, Roy Goodman, Richard Egarr or Ton Koopman.

"Andrés Alberto Gómez has an unusual touch control. Adapt his articulation to phrasing with the mastery of the greatest". Philippe Ramin, Diapason (5 diapason)