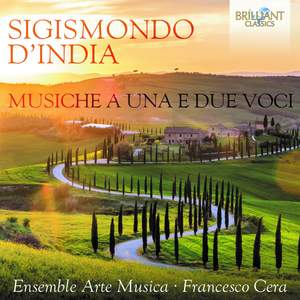 These songs for one and two voices come from the first four of D’India’s five books of Musiche, a series containing masterpieces of astonishing originality in the style of monody (solo melody with accompaniment), which had eclipsed the polyphonic madrigal in popularity at the dawn of the 17th century. With a career based largely in Turin and Rome, Sigismondo D’India nevertheless demonstrates stylistic links to both Monteverdi and Gesualdo, and it is the latter’s influence which supports new scholarship claiming D’India grew up in Naples (not Sicily) in the shadow of the great madrigalist’s free thinking on harmony. That very harmonic freedom – to accentuate key emotions in the text with piquant chord changes – is the hallmark of D’India’s own, self-styled ‘true manner’ of composing monody, adopted from Gesualdo’s intense, chromatic polyphony to the solo song or duet, and it suggests a Neapolitan, rather than Roman-Florentine, musical background. In D’India’s own words, he uses ‘intervals out of the ordinary, moving with the greatest invention from one consonance to the next, depending on the variety of the meaning of the words’ for ‘greater impact and greater power to move the emotions of the soul’.

It is this sense for the dramatic power of song that positions D’India as a true proto-operatic composer. In fact, his three-part setting of Clorinda’s death scene from Tasso’s Gerusalemme liberata (Amico hai vinto) predates by several years that of his contemporary Monteverdi: the revolutionary Il combattimento di Tancredi e Clorinda.

Perhaps the young D’India’s wide travels across Italy, absorbing the musical styles at each locale and acquiring a broad grasp of the varied stylistic practices throughout the peninsula in the early Baroque, gave him the conviction to claim his own style as the ‘true manner’. In any case, its originality and vision are truly remarkable.

Excellent performances by one of the leading Early Music ensembles of Italy, the Ensemble Arte Musica, led by harpsichordist Francesco Cera, who already recorded a splendid performance of the Tenebrae Responsoria by Gesualdo for Brilliant Classics.