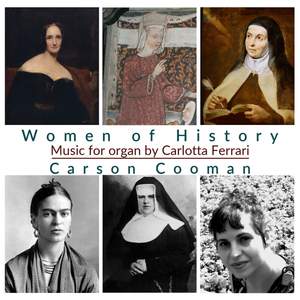 The concept behind this set of organ works is its best feature: a set of compositions inspired by five women from history. Cinematic soundscapes and clever interpretations. — BBC Music Magazine, August 2018,

The five compositions on this album are inspired by the lives and works of five women from history. Carlotta Ferrari (b.1975) has composed numerous pieces inspired by historical figures as well as pieces inspired by literature and works of art. Several of these directions are brought together in the five compositions on this album, which celebrate three religious figures, an artist, and a writer. In Ferrari's distinctive modal style, she creates expressive musical portraits of these women. The first four works on this album all employ the 'Restarting Pitch Space' (RPS) system of modal harmony. First developed by Carson Cooman in 2005, Carlotta Ferrari has worked extensively with this system in many compositions written since 2016. Carson Cooman (b.1982) is an American composer with a catalogue of hundreds of works in many forms—ranging from solo instrumental pieces to operas, and from orchestral works to hymn tunes. His music has been performed on all six inhabited continents. As an active concert organist, Cooman specializes in the performance of contemporary music. Over 300 new works have been composed for him by composers from around the world, and his organ performances can be heard on a number of recordings of which this is his fourth for Divine Art. This recording of the wonderful main organ of Laurenskerk, Rotterdam, Netherlands (Marcussen & Son) was made using the Hauptwerk remote digital access system.

The concept behind this set of organ works is its best feature: a set of compositions inspired by five women from history. Cinematic soundscapes and clever interpretations.