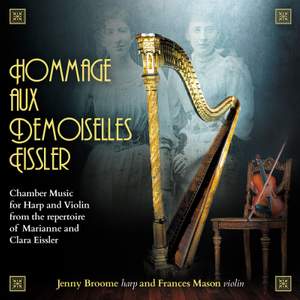 Hommage aux Demoiselles Eissler: Chamber Music for Harp and Violin from the repertoire of Marianne and Clara Eissler

Saint-Saëns Fantaisie Op 124 for violin and harp stands alone in the repertoire. In planning recital programmes it is good to be able to include music from a range of styles, so Marianne and Clara Eissler, the dedicatees of the Fantaisie, offered the possibility of finding a repertoire from an earlier age. Musical historians tell us very little about them, but in their day, they were celebrated performers, known and loved by people all over Europe. Uncovering their lives and the music they played has been largely a matter of searching newspaper reports. They lived at a time of great wealth and great houses, of railway travel, of life lived in public, of news widely disseminated and repeated. The music they played is essentially Victorian, but the titles and associations hide music that has its own charm. This was an age when a large and diverse audience listened to and enjoyed classical music, and when the aristocratic element of that audience was well educated in music and supported and enabled its performance. The story of the Eisslers is also a story of women fighting to build careers as independent women at a time when most careers were cut short by marriage. In addition to the Saint-Saëns ‘Fantaisie’ this recording features pieces by Carl Oberthür, Louis Spohr, Alphonse Hasselmans, Francis Thomé, Charles Villiers Stanford, Gabriel Pierné, August Wilhelmj (after Wagner), Richard Pohl and lastly John Thomas (harpist to Queen Victoria). The CD booklet contains highly informative notes by Jenny Broome.