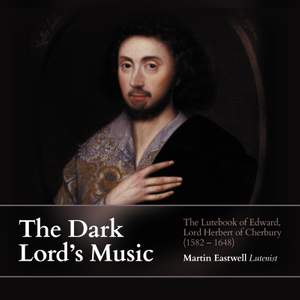 Edward, Lord Herbert of Cherbury (15821648) is one of the most extraordinary figures of 17th Century English life - brother of the poet George Herbert, but in his own right a diplomat, soldier, courtier, philosopher, poet, historian and musician, as well as being the author of one of the earliest and most entertaining autobiographies in English. In it, he tells us that he learnt 'to sing my part at first sight in Musicke, and to play on the Lute with very litle or almost noe teaching....My learning of Musicke was for this end that I might entertaine my selfe at home and together refresh my mynde after my studyes to which I was exceedingly inclined, and that I might not neede the company of younge men in whome I obserued in those tymes much ill example and deboist'. However, his lute book, preserved in the Fitzwilliam Museum in Cambridge, tells another story, for it is among the most important sources of English and Continental instrumental music of this period. Almost all the major English lute composers of the era are represented, while the large number of works by Continental composer is probably a consequence of Lord Herbert's extensive travels and wide range of acquaintance throughout Europe. The book also contains extraordinary and otherwise unknown works by Cuthbert Hely and Lord Herbert himself, a last echo of English lute music's 'Golden Age'.