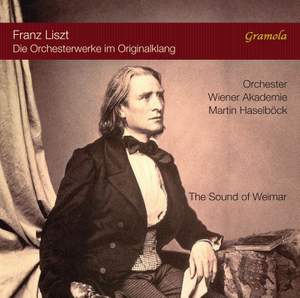 Liszt: The Sound of Weimar

No. 6 in D Major "Pesther Carneval"

The fact that Franz Liszt often is reduced to his piano works is due in part to the bad reputation he gained for his conducting during his time in Weimar. The orchestra, however, which was at his disposal at the local theatre inspired him to extraordinary accomplishments. He experimented with new playing techniques and sound colours, as well as with new forms of composition like the symphonic poem. Much of Liszt's composing art was only later be adopted by Wagner and perfected by Richard Strauss. The recordings of Liszt's orchestral oeuvre by the Orchester Wiener Akademie with founder and conductor Martin Haselbock from the concert hall at Raiding, Austria, the composer's birthplace, is now being released as complete edition on nine CDs. Period instruments, gut strings in combination with special romantic bows for the strings as well as the reduced cast of instruments contribute to an orchestra sound, that may well approach the original sound – hence the edition's title 'The Sound of Weimar'.