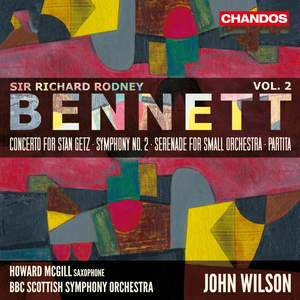 The performances of all these works, under the composer’s friend John Wilson, are exemplary. The players of the BBC Scottish Symphony Orchestra treat Bennett’s melodic lines with just the expressive... — BBC Music Magazine, October 2018, More…

The recent partnership of John Wilson and BBC SSO on record reaches this second volume in their invigorating exploration of fascinating orchestral works by Sir Richard Rodney Bennett. Less well known than his widely famous film music (Murder on the Orient Express, Four Weddings and a Funeral, etc.), the orchestral works featured here display the versatility with which Bennett contradicted the dogma of musical modernism at the time of their creation (60s-70s), as well as an evolution of his compositional style towards a musical language that spoke to audiences everywhere in the world. From the glittering Symphony No. 2 – generating subtle yet engaging musical contrasts on a large scale – to the jazzy Concerto for Stan Getz – featuring the saxophonist Howard McGill who has established himself as one of the greats of London’s jazz scene – this album features works that break down the false walls between two musical worlds and will appeal to anyone willing to explore, discover, or simply enjoy great music.

The performances of all these works, under the composer’s friend John Wilson, are exemplary. The players of the BBC Scottish Symphony Orchestra treat Bennett’s melodic lines with just the expressive flexibility they need and meet the technical challenges of the Symphony with aplomb. Howard McGill brings the expertise of a seasoned jazz soloist to the Concerto.

What Bennett displays in the Partita is so redolent of William Walton…But most revealing of all – and perhaps the biggest testament to Bennett’s prowess as a composer – is the fact that whether he’s flexing his intellectual muscle in the Second Symphony, schmoozing in the Sax Concerto’s slow movement or simply having a good time in the Partita, this is unmistakeably the work of the same composer.

Anyone who knows Bennett’s rewarding idiom from his film scores won’t find anything to frighten the horses — the bluesy Concerto for Stan Getz is the longest piece here, at just over 21 minutes — but the gritty Symphony, amiable Serenade and tuneful Partita are worth rediscovering in Wilson’s empathetic performances.