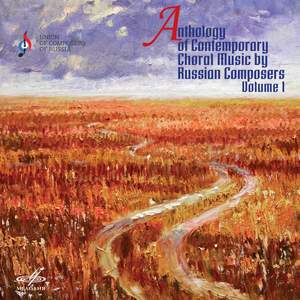 This is a choir to watch in concert. They exude youthful confidence and thoroughly enjoy themselves in Alexander Tchaikovsky’s Can’t get Drunk With Unpleasant People — Choir & Organ, May/June 2019, 3 out of 5 stars

Agafonnikov: Canticle for the 150th Anniversary of the Moscow Conservatory

I. If You’re Sweet, You’ll Get Pecked

II. He Who is Not Sinful to God is Not Guilty Towards the Tsar

Chalayev: From the Cycle Dedication

No. 7, The Mountain Heights (From Goethe)

Podgaits: Console Yourself, My Soul

Yevgrafov: About Love and the Sky

Bodrov: "Gloria" for choir and piano

Chudova: Concerto for Choir "The Tram of Poetry"

Tchaikovsky, A: Can’t Get Drunk with Unpleasant People

Firma Melodiya and the Moscow State Tchaikovsky Conservatory with support of the All-Russian Non-governmental Organization The Union of Russia’s Composers present the first release from the large-scale project Anthology of Contemporary Choral Music by Russian Composers performed by the Chamber Choir of the Moscow State Conservatory.

This unique choir was established in the mid-1990s as a choral laboratory of modern music. The MSC Chamber Choir led by the outstanding choirmaster Boris Tevlin was distinguished by the diversity of its programmes that comprised holy canticles to spirituals, bright theatrics of its performing style and supreme professional mastery. However, modern music has always been the choir’s particular focus of attention. The choir has numerous domestic and international premieres to its name. In addition, the MSC Chamber Choir is a regular participant of musical festivals and fora dedicated to composers of the 20th and 21st centuries.

In 2012, after maestro Tevlin’s passing, Alexander Soloviev, one of his students and followers, and now a professor of the Moscow Conservatory, took on leadership of the MSC Chamber Choir. The choir keeps expanding its repertoire, but its major direction remains the same – music of modern composers written in different styles and manners.

Anthology of Contemporary Choral Music by Russian Composers is a peculiar result of Alexander Soloviev’s five years with the choir. It is compiled from recordings of the choir’s live broadcasts from the Grand, Small and Rachmaninoff halls of the Moscow Conservatory.

This is a choir to watch in concert. They exude youthful confidence and thoroughly enjoy themselves in Alexander Tchaikovsky’s Can’t get Drunk With Unpleasant People