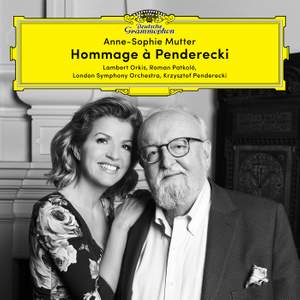 Var. I Tempo I

Deutsche Grammophon is releasing a double album showcasing a number of the composer’s works for violin and piano or violin and orchestra, including La Follia, Duo concertante, Sonata No.2 and Metamorphosen. All of them feature the violinist Anne-Sophie Mutter, whose name is closely associated with that of Penderecki. Penderecki dedicated his Violin Sonata No.2 for Anne-Sophie Mutter, out of admiration for her interpretative skills, as have many other contemporary composers. The piece consists of five parts and is almost as long as the composer’s concertos for violin. Anne-Sophie premiered the work together with Lambert Orkis, her longtime musician partner, at the Barbican in London on 29 April 2000 and has recorded it now for the first time. The recording of Duo concertante includes the young bass player Roman Patkoló as Anne-Sophie Mutter’s partner. Patkoló was a student of the Anne-Sophie Mutter foundation.

Written in Penderecki’s 80th birthday year, the newest work shows undiminished mastery: La Follia is a big, Baroque-inspired solo piece…The performances are faultless and – since they feature their dedicatee and in one instance even their composer – surely count as definitive.

Penderecki’s Second Violin Concerto, Metamorphosen (1995), was also his first collaboration with Mutter…The fervency of Mutter’s commitment is unerring, as is that of the London Symphony Orchestra under the composer…Throughout, Mutter’s playing has all the imperiousness this music requires.

The Mutter style typically mixes steely authority with febrile emotion. Nothing dislodges her assertive technique, certainly not in the eclectic, often neo-romantic, highly coloured music written by Penderecki after he turned his back in the 1970s on the flinty screams of avant-garde.