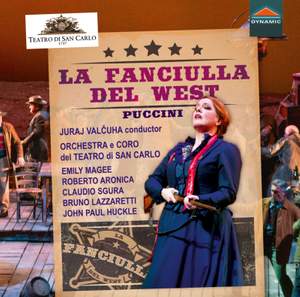 Aronica is a handsome Dick Johnson in every sense of the word; and the American Emily Magee is a Wagnerian-voiced Minnie who somehow bypasses the god-fearing naivety suggested in the libretto.... — BBC Music Magazine, October 2018, 3 out of 5 stars More…

Triumphantly premiered at New York's Metropolitan Opera on 10th December 1910, La fanciulla del West brought Puccini huge international success, even though the opera was never to attain the popularity of La bohème, Madama Butterfly and Tosca. It was Puccinis first important attempt to free himself from the traditional patterns of operatic dramaturgy, making use of surprisingly modern musical language, as recent scholars have duly pointed out. This recording documents the production staged at the Teatro San Carlo in Naples at the opening of the 2018 season, with Hugo de Ana as director and set designer, and Juraj Valuha as conductor, both praised by audiences and critics alike.

Aronica is a handsome Dick Johnson in every sense of the word; and the American Emily Magee is a Wagnerian-voiced Minnie who somehow bypasses the god-fearing naivety suggested in the libretto. But you do cheer when, racing against time, she rescues Johnson from the rope.

[Magee] is a little rough-and-ready in Act 1 – which suits the character – and can depart from the note on occasion, her tone a touch acidic. But it’s a gutsy performance and she’s dramatically engaging…Sgura has an inky baritone and can certainly snarl, but his sheriff is elegantly sung. Roberto Aronica is a stolid but likeable Dick Johnson, a little cloudy mid-range but the voice opens up nicely at the top. ..this is an enjoyable recording and could win Puccini’s opera new converts.

Acting values are high…Vocal performances are strong, too. Sgura makes a grandiose Rance…Best of all is Emily Magee’s Minnie, something of a paragon, up to each and every one of her role’s vocal demands and exuding truth and sincerity in her physical realization of Puccini’s idealized, redemptive heroine…The choral and orchestra forces of the San Carlo are on exceptional form under their Slovak music director Juraj Valčuha, who proves a commanding exponent of the score.