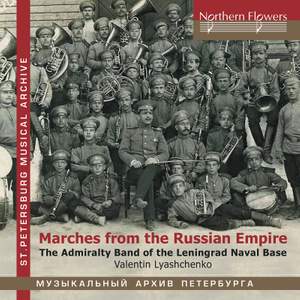 Marches of the Russian Empire

The Admiralty Band of the Leningrad Naval Base

Minkus: Roxanne, the Beauty of Montenegro

Recorded on this disc by the Admiralty Band (the best military band in Russia!) are fast marches, which were well-known by the early 20th century in military bands’ repertoires, but were not regimental marches. They were composed in different countries at different times, and on different occasions – German/Prussian, Austrian, Danish, French, and Russian marches. The recordings cover a great time period, from the early 19th century to the turn of the 20th century.