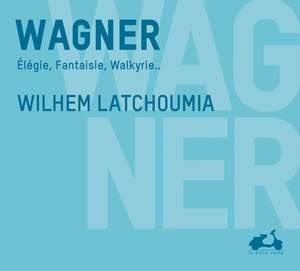 Wagner: Elegy in A flat

Two original compositions by Wagner, five pieces inspired by his operas, three of them by Tristan und Isolde: Wilhem Latchoumia’s programme forms an edifice at once unique and coherent, of which the artist gives an epic interpretation, full of rich timbres, which will appeal to both Wagnerites and connoisseurs of pianistic rarities.

Wilhem Latchoumia is a highly unusual kind of pianist, equally successful and charismatic in contemporary music and the mainstream repertory. The French musician is known for his skill in devising programmes that venture well off the beaten track and his ability to create a joyful rapport with audiences right from the start. He pursues a brilliant career as a recitalist and concert soloist in France and on the international scene.

His taste for contemporary music has earned him the favour of such composers as Pierre Boulez, Gilbert Amy, Gérard Pesson, Philippe Hersant, Michael Jarrell, Jonathan Harvey, Pierre Jodlowski, Karl Naegelen, Francesco Filidei, José Manuel López López, Samuel Sighicelli, Oscar Bianchi, and Franck Bedrossian. He is the instigator and performer of a programme of new music built around John Cage’s Daughters of the Lonesome Isle; the production, supported by the Fondation Royaumont, continues to tour in France and abroad.

Born in Lyon in 1974, Wilhem Latchoumia studied in the class of Eric Heidsieck and Géry Moutier at the Conservatoire National de Musique et de Danse of his native city, where he obtained his Premier Prix with congratulations by unanimous decision of the jury. He completed his training with Géry Moutier in the postgraduate class in Lyon, then became a student of Claude Helffer and attended masterclasses by Yvonne Loriod-Messiaen and Pierre-Laurent Aimard. He also holds a bachelor’s degree in musicology. Having received awards from the Hewlett-Packard Foundation (‘Musicians of Tomorrow’, 2004) and at the twelfth Montsalvatge International Contemporary Music Competition (Girona, Spain), he achieved dazzling success at the Orléans International Piano Competition in 2006, where he won the Premier Prix Mention Spéciale Blanche Selva and five other prizes.