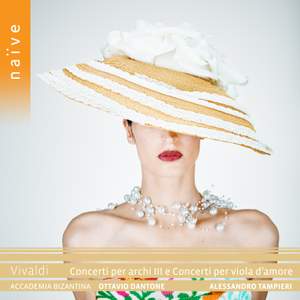 They are appealing works with notably expressive slow movements. Alessandro Tampieri is a fine players with all the requisite sensibility to make the most of this gently alluring instrument…Dantone... — BBC Music Magazine, August 2018, 4 out of 5 stars More…

Certainly, there are the Four Seasons and all the violin concertos which are more famous and virtuosic than other works. But it is here, in his concertos for solo strings, that Antonio Vivaldi showcases his writing talent at its highest and purest level: concise, vivacious, deep and immediately emotional. A Vivaldi in the firmament, served here with passion and excellence by Accademia Bizantina.

The Concerti for strings take you on a journey of feelings, diverse landscapes, and histories. Here we have thirteenmusical miniatures in which emerge the influence of neighbouring and distant lands, and of the sea surrounding Venice. This is clear in concerto RV 163, entitled Conca, inspired by the sound of the conch shell (or Wettertrompete), which Vivaldi had the chance to hear in Bohemia, and to which sailors attributed the power to appease or unleash the storms.

The Concerti for viola d'amore are of a more mysterious character. Notably because this fascinating instrument has strings which vibrate independently when the melodic strings are rubbed. Vivaldi, like some of his students - and like Alessandro Tampieri! - was a great virtuoso of the instrument, which has incidentally only been used on and off since the 19th century. The soft, evocative sounds of the viola d'amore, reminiscent of Oriental worlds, here reach their climax in the poignant Largo of concerto RV 393, the lively finale of concerto RV 394 and the delicate Andante in D minor of concerto RV 395.

They are appealing works with notably expressive slow movements. Alessandro Tampieri is a fine players with all the requisite sensibility to make the most of this gently alluring instrument…Dantone and Accademia Bizantina are on scintillating form throughout, and the recorded sound is excellent.

Even when the basic invention…is formulaic, Vivaldi’s trademark incendiary energy carries the day. There is also more variety than you might suspect… Dantone and his players ensure that Vivaldi’s elemental, explosive energy is never short-changed. Tampieri dispatches the reams of bravura passagework with fire and grace, and adds his own entertaining, even crazy cadenzas that exploit the deep, buzzy resonance of the viola d’amore’s sympathetic strings.