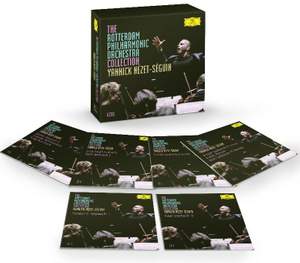 This collection of previously unreleased live recordings celebrates the Rotterdam Philharmonic Orchestra’s centenary and the ten-year residency, from 2008 to 2018, of its principal conductor Yannick Nézet-Séguin.

The Rotterdam Philharmonic, under its long-term Principal Conductor Yannick Nezet-Seguin, is widely recognised as one of Europe’s most distinguished orchestras. Celebrated for its winning combination of passionate commitment, boundless energy and scintillating virtuosity, the orchestra has come a long way since its relatively humble beginnings in 1918 as a private ensemble whose members initially paid for the privilege of joining its ranks.

The arrival of Canadian maestro Yannick Nezet-Seguin in 2008 signalled a new golden era for the Rotterdam Philharmonic, as is evidenced by this outstanding set of recordings, captured live in the Doelen concert hall between 2011 and 2016 and collected together here for the first time by Deutsche Grammophon. At the end of 2017/18 season Nezet-Seguin assumes the role of Honorary Conductor, handing over the post of Principal to 29-year-old Lahav Shani.