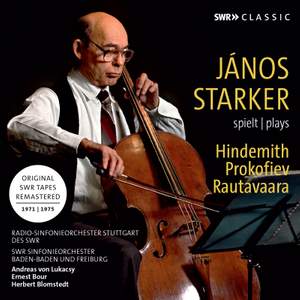 This is a re-release of an SWRmusic bestseller containing rarely performed cello concertos of the 20th century, here interpreted by János Starker, without doubt one of the greatest cellists ever. Janos Starker’s cello playing is often described as a “mixture of fire and ice,” and is characterized by an indomitably forward-driving power, a linear tension that leaves no room for narcissistic sentimentality. The key to it is his idea of “anticipatory playing,” that is, of constantly “forehearing,” which he demanded of his pupils, as well as clearly knowing that a constant distribution of the body tension as well as musical tension is part and parcel of virtuoso discipline, that only after the last tone has died out is there any room to really ease the tension. In the major solo concertos from the Romantic era on, he always saw his role as that of the protagonist, facing the orchestra on an equal footing. He considered the concertos as symphonic works of developing interaction and stressed that it was not a matter of keeping the soloist always in the foreground.