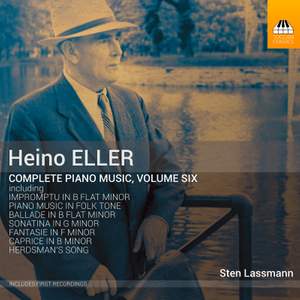 Eller: Ballade in B flat minor

Eller: Impromptu in B flat minor

Eller: Valse in B flat minor

Eller: Scherzino in B minor

Scherzo in B Minor

Eller: Caprice in B minor

The piano music of the Estonian composer Heino Eller (1887–1970), a total of 206 works, is the largest part of this composer's output. It is also the largest body of works in Estonian classical music. But most of these pieces are unknown, even though the best of them are original contributions to the piano repertoire of the twentieth century, with Eller's sensitive lyricism underpinned by gentle humour and an occasional epic tone. Volume Six in this series of nine recordings brings over half-a-century of music, from 1910 to 1965. It includes the melodious Sonatina in G minor, the spirited Piano Music in Folk Tone and the exquisite La fille du nord.