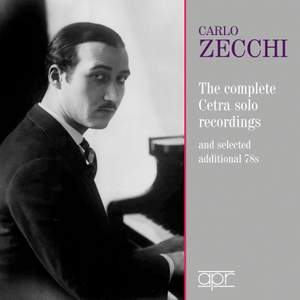 Carlo Zecchi performs his Scarlatti with a delicate bell-like sonority, is a marvel of fleetness, his selection of familiar and unfamiliar numbers spun off with exhilarating brilliance and vivacity.... — International Piano, September/October 2018, 3 out of 5 stars More…

Carlo Zecchi (1903-1984), studied with both Busoni and Schnabel and had a brief, but meteoric, career as a soloist, before switching in 1942 to conducting, with occasional forays into chamber music. Like his fellow Italians Michelangeli, Vidusso and Fiorentino, he possessed an immaculate technique, which gives his playing a sense of lightness and ease in even the most difficult passages. The recorded Liszt etudes are almost unrivalled in their virtuosity and in Scarlatti and Bach the evenness of his finger-work has to be heard to be believed. But he was a poet and a colourist too, as the more lyrical works of Chopin, and the Debussy Poissons dor reveal. Sadly, Zecchis recorded repertoire is small and this set includes an example of every piano work he recorded on 78s. Long known as a cult pianist to a select few, it is hoped these new transfers by Mark Obert-Thorn will bring his small but priceless legacy of piano recordings to a wider audience.

Carlo Zecchi performs his Scarlatti with a delicate bell-like sonority, is a marvel of fleetness, his selection of familiar and unfamiliar numbers spun off with exhilarating brilliance and vivacity. There is a champagne sparkle.

This is one of the most compelling historical piano recordings that has ever come my way, and I shall be returning to it often. The recorded legacy of Carlo Zecchi will prove a valuable treasure to lovers of great pianism.