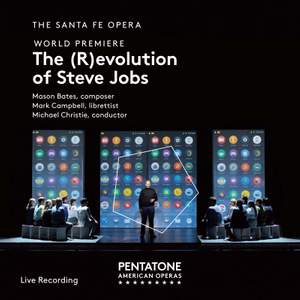 Bates’s vocal writing can be taxing, though its challenges are all wonderfully met in the recording…Edward Parks gives a terrific central performance as Jobs, capturing both this charisma and... — Gramophone Magazine, September 2018 More…

Prologue. Thought It Was High-time

Scene 1, Thanks for Coming

Scene 3, What Are You Doing Here?

Scene 6, I Still Don't Feel Anything

Scene 7, That Can Also Be a Ticking Clock

The Rise and Fall of Steve Jobs

Scene 12a, They Need to Make a Change

Scene 12b, You've Become One of the People We Hated

Scene 12c, They're Waiting for You in the Boardroom

Scene 16, Where Were You

In their astounding new opera The (R)evolution of Steve Jobs, composer Mason Bates and librettist Mark Campbell explore the spiritual evolution of one of the most influential men of modern times as he creates a revolutionary new world of technological empowerment, then discovers a larger world within himself.

Like Steve Jobs, composer Mason Bates is an innovator whose creativity breaks through boundaries, combining traditional orchestration with electronics in ways that have made him one of the most sought-after and widely programmed composers in the United States. In The (R)evolution of Steve Jobs, Bates and Campbell give us an alternative and intimate perspective of a public life, examining the people and experiences that shaped Steve Jobs: his father, his Buddhist practice, his rise and fall as an executive, and finally his marriage to the woman who showed him the power of human connection.

Bates’s vocal writing can be taxing, though its challenges are all wonderfully met in the recording…Edward Parks gives a terrific central performance as Jobs, capturing both this charisma and his cruelty in singing that swerves between persuasive elegance and caustic irony…Christie conducts with plenty of energy and verve, and the playing and choral singing are exemplary in their precision.

Everything unfolds with a lightness of compositional touch, and often at high speed. Yet for most of the opera’s first half, there is a lack of dramatic urgency…The performers excel. Sounding robust, well grounded and mellow, Edward Parks’s Steve is respectable rather than charismatic, and certainly more likeable than the original. Sasha Cooke is an affecting Laurene, all warmth, gentleness and sensuous glow.

Musically and dramatically it’s an assured enough first opera, if an unremarkable one...The striking moments come from the orchestra, conducted by , though Bates’s music still sometimes falls back on second-hand rhetoric, just as his vocal lines lapse far too easily into a comfortably bland all-American idiom that is part Copland, part Bernstein, part Broadway.