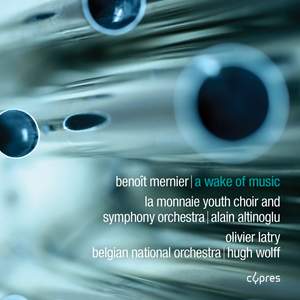 II. Of Being Is a Bird

IV. There Is Something Quieter Than Sleep

V. Angels, In the Early Morning

VII, A Transport One Cannot Contain

This album is the first recording to feature the organ of the Salle Henry Le Boeuf in the Palais des Beaux-Arts in Brussells now at last restored for the celebrations of its inauguration!

Two pieces on one album, two distinct commissions made to Benoit Mernier for two different orchestras: the Dickinson Songs for a youth choir (La Choraline) together with the Orchestre Symphonique de La Monnaie conducted by Alain Altinoglu and an Organ Concerto dedicated to its first performer, Olivier Latry, with the Belgian National Orchestra conducted by Hugh Wolff!

Benoit Mernier tackles two considerable challenges: writing for an apprentice choir of young girls who know nothing of Emily Dickinson, and bringing out the aural range of an as yet untested organ, conceived on a large scale and with a view to stereophony... together with all the technical difficulties that implies when faced with a symphony orchestra. Two worlds on show linked by the drive of youthful discovery.