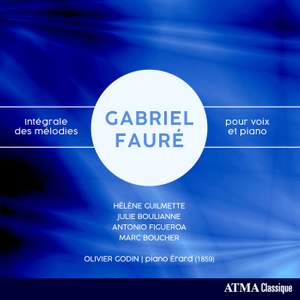 ATMA Classique is delighted to present the complete mélodies for voice and piano of Gabriel Fauré (1845-1924) performed by Helene Guilmette (soprano), Julie Boulianne (mezzo soprano), Antonio Figueroa (tenor), Marc Boucher (baritone) and Olivier Godin (piano). This recording marks the first time the songs will be heard in their original keys and voice types, according to the composer's indications for their first performances.

Included are pieces written as incidental music for the stage, such as songs for Shylock or Melisande. This retrospective of Fauré's mélodies traces the evolution of the composer's unique aesthetic, from the charm of his earlier pieces to more mature works such as Clair de lune and Après un rêve, which demonstrate his standing as a master of the French art song. Fauré's mélodies were recorded between October 2015 and September 2017 in Bourgie Hall at the Montréal Museum of Fine Arts. The recording was produced in association with Classica Festival, under the artistic direction of Marc Boucher.

Pianist Olivier Godin accompanies the singers on an 1859 Erard piano tuned to 435 Hz, the official concert pitch of the early 20th century. The piano belongs to the Arte Musica Foundation at the Montreal Museum of Fine Arts and is known for its exceptional workmanship and unique sound.