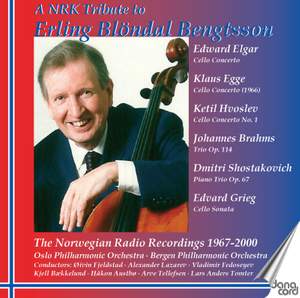 Danacord continues its tribute to the Danish cellist Erling Blöndal Bengtsson. From Norwegian Radio recordings Bengtsson plays a programme of mostly core repertoire, including Elgar's ever-popular Concerto and chamber-music masterpieces by Brahms and Shostakovich. Bengtsson also includes the Cello Sonata of Grieg and, leaping forward in time, contemporary Concertos by Klaus Egge (1906-1979) and Ketil Hvoslev (born 1939), both of which are accessible and intriguing. Throughout, Bengtsson brings musical perception and technical prowess to illuminate this stimulating collection. Erling Blondal Bengtsson gave his first public performance in Copenhagen, where he was born, in 1936 when he was only four years old. When he was sixteen, he was admitted to the Curtis Institute of Music in Philadelphia where he studied under Gregor Piatigorsky. From 1950 to 1953 he taught his own cello class at the Institute, before being appointed to the Royal Danish Academy of Music.He was a member of the Royal Swedish Academy of Music and was conferred the title “Chevalier du Violoncelle” by Indiana University in 1993. His large discography contains recordings that remain the go-to references for pieces in the cello canon.