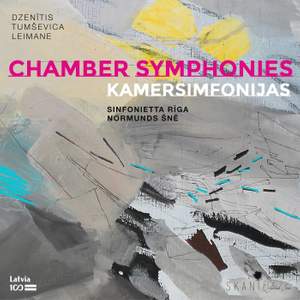 "The chamber symphony - significant ideas for a smaller orchestra - turned out to be a tempting challenge! Latvia has never before had an ensemble like Sinfonietta Riga. Our repertoire is being created today, and the ensemble regards this as a strategic and responsible mission.

The compositions on this recording are significant and enduring. We believe that they reflect the unique style of each composer in a vivid and exciting way, allowing no compromises. They have revealed luscious colours and enchanting lightness and nuance in the orchestra's sound.

The main theme of rising fourths in Arnold Schoenberg's Chamber Symphony No. 1 was destined to fly high and remain in the musical heavens for eternity. I am still fascinated by the notion that cosmic ideas do not always require grandiose resources, that the realisation of such ideas through the energy contained within a relatively small ensemble nevertheless reaches its goal with perfect precision." Normunds Sne

Andris Dzenitis is one of the best recognised Latvian composers of his generation. His compositions have been performed by leading European orchestras and chamber ensembles. For 2018 he is collaborating with organ player Iveta Apkalna and expecting the debut of a work commissioned by conductor Andris Nelsons for the Boston Symphony Orchestra and the Leipzig Gewandhaus Orchestra.

Anitra Tumsevica is a multifaceted composer in terms of genre and also the means of expression that she employs. In 2008 she won the opera competition in Bodo, Norway, thereby giving her the opportunity to stage her first work, a one-act chamber opera titled Sarkans (Red).

Linda Leimane is one of the most promising young composers in Latvia, an artist who expertly merges conceptual thought with the musical message.

Sinfonietta Riga was established in 2006 but has already become one of the Latvian culture icons. It has won a Grammy Award for its participation in the recording of Adam's Lament by Arvo Part (released by ECM). Sinfonietta Riga has recorded ten other albums, released by Wergo, Ondine, Edition Records and Challenge Records.