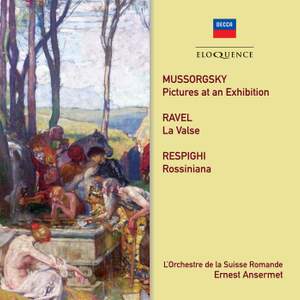 No. 5, Ballet of the Chickens in Their Shells

No. 6, Samuel Goldenberg and Schmuyle

No. 7, The Market-place at Limoges

No. 8, The Catacombs (Sepulchrum romanum)

A major addition to the Ansermet discography: vividly coloured repertoire for which the conductor was renowned, in stereo recordings previously unreleased in any format.

One of the greatest conductors of the last century, Ernest Ansermet got the whole world listening to new music by composers who were often personal friends: among them Debussy, Stravinsky (most of all), Britten, Bartók, Martinů – and Ravel, with whom he had a relationship stretching more than three decades before he made this recording of La Valse for Decca in April 1958 with the Orchestre de la Suisse Romande in the orchestra’s home of the Victoria Hall, much beloved by Decca’s engineers, who made their first-ever stereo recording there. It was in Geneva that Ravel had asked Ansermet to ‘try out’ some fragments of a new score, to hear how it sounded, before delivering it to his publisher in Paris. In Geneva on 12 November 1921, Ansermet conducted the first Swiss performance of La Valse in the presence of the composer, who wrote to the conductor a few days later: ‘You understood La Valse completely, I could never have obtained such rhythmic suppleness in Paris’. He recorded the piece several times with the OSR, in 1947, 1953, 1958 and 1963, but the stereo cut from 1958 has never previously been issued.

In the same sessions, Ansermet recorded Ravel’s orchestration of Mussorgsky’s Pictures at an Exhibition. Although Decca issued his versions from 1953 and 1959 with the orchestra, this 1958 recording has never been available at all, though it had band numbers and catalogue numbers allocated for an original issue on LP. However, the performance exhibits the poise, precision, acute sense of tempo and style which are all Ansermet hallmarks. The release is completed by another arrangement in tribute from one great composer to another: the operatic excerpts which Respighi formed into his four-movement Rossiniana suite with a vibrant, early-twentieth- century orchestration. Dating from February 1967, this is among Ansermet’s final recordings before his death two years later.

‘A suavely relaxed performance, nearly impeccable in execution. Always aware of nuances, Ansermet treats the music with the simplicity and beauty of melodic line it deserves.’ High Fidelity, August 1968 (Rossiniana)

‘The production, both as a performance and a recording, is virtually beyond criticism.’ Fanfare, March-April 2006 (Rossiniana)